Well, folks, I don’t know if you’ve had a chance to see what’s happening in Nevada right now, but I can tell you… it’s nothing short of magical. As we speak, the “RED WAVE” we’ve been talking about for eons now is starting to rear its lovely head. And we’re now able to get a better picture of what’s to come. Now, I know we’re still a couple of months out, and I am not trying to jinx us or count our eggs before they hatch, but I gotta tell you, our candidate Joe Lombardo is running one helluva campaign. He’s basically mimicking Glen Youngkin’s campaign, and it’s working. It’s working so well, that Joe has just taken the lead in one of the most reliable polls out there.

Yahoo News reported that the Nevada governor’s race is tight. Republican nominee Joe Lombardo is throwing the book at his Democratic opponent, Gov. Steve Sisolak, on the issue of education.

In recent weeks, Lombardo, who polls show is running neck and neck with Sisolak, has thrashed the incumbent on the issue, criticizing him on school safety, curriculum claims and pandemic-era school closures while pushing for “parents’ rights.”

It’s a page taken from the playbook of Glenn Youngkin, Virginia’s Republican governor, who flipped a blue state red in a closely watched governor’s race by leaning in heavily to education and parents rights in the final weeks of the campaign. Lombardo’s focus has thrust the GOP’s attempts to make education policy a campaign strength further into the spotlight.

Youngkin, who like Lombardo was a first-time candidate, won the governor’s race in a state President Joe Biden carried by 10 percentage points partly by stoking alarm over critical race theory, melding it with voters’ frustrations over pandemic school closings, and joining a push by conservatives to attack a wave of curriculum changes. The approach was part of a strategy to animate his base without alienating moderates. It won him enough support from women and suburban voters to steal victory from his Democratic opponent, former Gov. Terry McAuliffe, in the blue state.

A year later, Lombardo, the sheriff of the state’s most populous county, is trying to do the same — and he’s brought Youngkin in to help him.

“I want to be considered the education governor,” Lombardo said Thursday at the first of two campaign events focused primarily on education.

“He’s got the title of the education governor,” Lombardo said, nodding to Youngkin, who attended both events and spoke about his own approach on the issue during his campaign. “But I’m going to take it away from him,” Lombardo said.

It’s not as “tight” as you may think, Yahoo. According to one of the best pollsters around, Joe is really starting to pull away.

Trafalgar, who seriously, really is one of the top pollsters, they’ve consistently been the most correct, because they’re not using polling as a media marketing tool. Just the facts, baby. That’s what they’re all about and that’s why this poll is so damn awesome.

Joe just wants to focus on “kitchen table” issues. Something Dems can’t do, because very few people are sitting around the kitchen table talking about 167 genders. 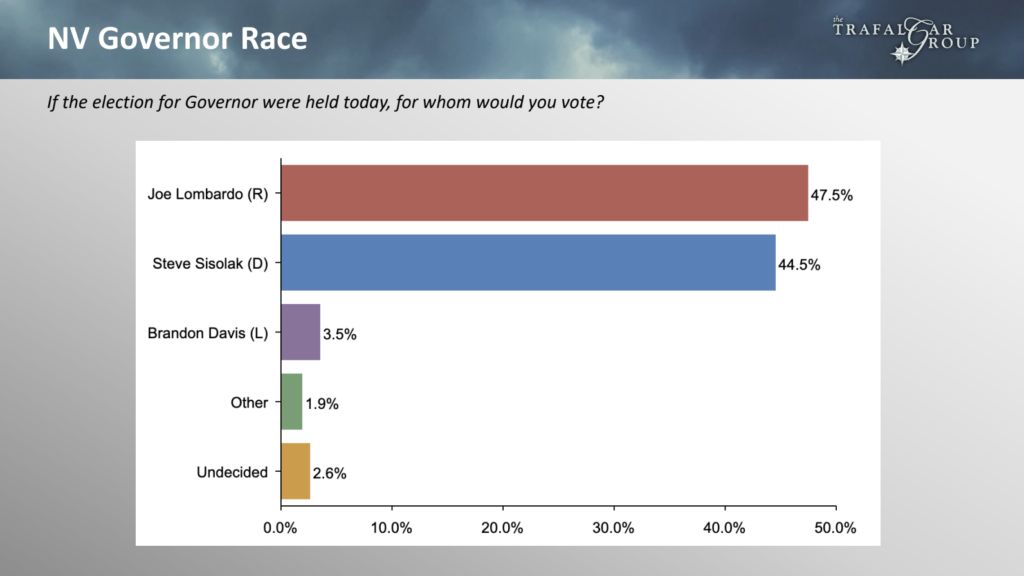 It doesn’t surprise me that this happening.

One fact is that the Hispanic voters are shifting “red” so they’ll help us out a lot in states like Nevada and Arizona. And Nevada’s governor is a woke idiot who is basically destroying The Strip; the ONLY source of income in Las Vegas. His handling of COVID was an absolute absurdity.

Also, our candidates can blast Biden’s border and promise to put guards in place to help slow the influx of illegal immigration and hopefully work with a completely RED congress to end much of it.

The other side can’t say anything. The border is a disaster and everyone knows it.

That’s why Kari Lake is pulling ahead in her race for Arizona governor. The border is now one of the top election issues, and we should thank President Trump foremost for that, and also Abbott and DeSantis as well. They brought national attention that was much-needed right before the midterms.

Now, we just have to make sure there’s no “funny business” in terms of cheating. We don’t want to see those infamous “2:00 am” ballots pouring in. We have to be diligent and dot all our t’s and i’s, and if we do that, and we flood the polls, we should be very victorious this November.

One of the most dependable websites for original reporting, investigative reporting, and breaking news in the conservative media is now WayneDupree.com. It is the only group combating communist bias in the media and entertainment, and it is its hard news division.

Because the success of our objective is so important to the economy and because leftist media’s COVID falsehoods probably cost lives, we need your help. Donate to WayneDupree.com today so that we can keep covering stories that the leftist media won’t touch. Your decision to donate $5 per month, $50 per year, or $100 per year will enable us to continue the difficult work of making sure a free and fair media survives in our nation.
[The WDStaff]

Like an East German Dictator, Biden Brooks No Dissent