Take a look at this: 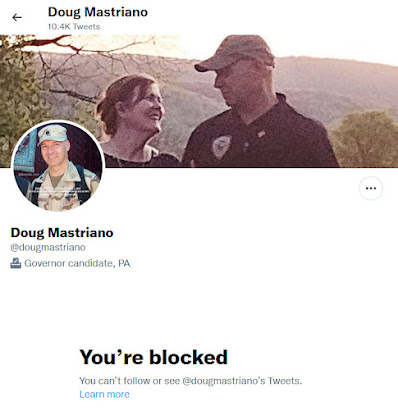 And this is the last thing I tweeted on State Sen. (and now GOP cand for PA Gov) Doug Mastriano’s twitter feed:

And now my necessary reminder to all that @dougmastriano betrayed his oath of office to “support, obey and defend” when he joined Trump’s attempted coup.

He does not deserved to hold public office. Ever.

I’m not sure if the braintrust over at the Mastriano campaign made the connection so I’ll make it for them.

But think of this for a minute. We live in a democracy (or a “representative democracy” to be slightly, if unnecessarily, more precise), a political process that values the free flow of ideas.

Doug Mastriano is running for governor of Pennsylvania.

I am a voter in Pennsylvania.

Will this be how he treats his constituents if the worst happens and he’s elected Governor?