Brazil Just Had Its January 6. It Wasn’t Hard to See It Coming. – Mother Jones 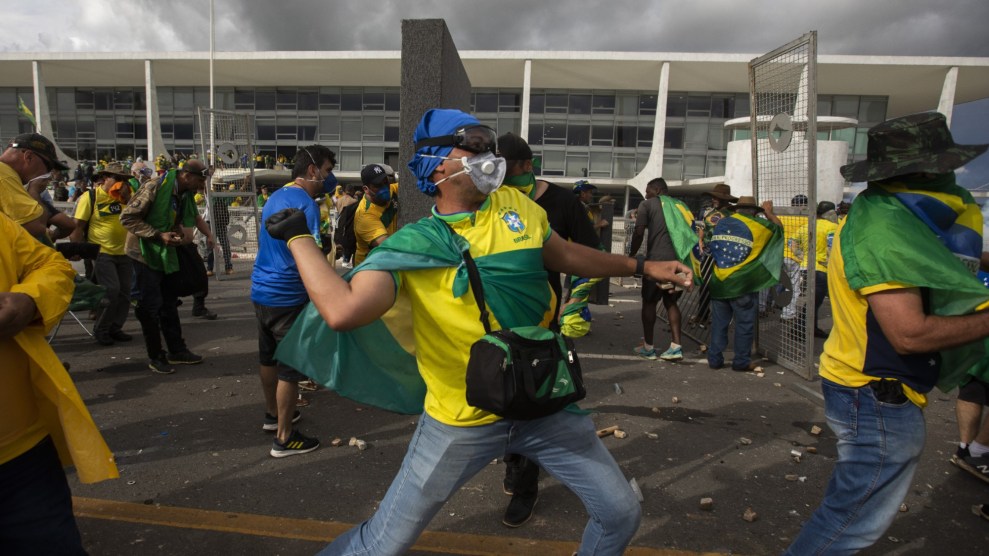 RIO DE JANEIRO – On January 1, 2023, a photograph of newly inaugurated Brazilian President Luiz Inácio Lula da Silva, walking up the access ramp to Palácio do Planalto, the presidential offices building in Brasilia, accompanied by a diverse group of people representing Brazil’s society—including a Black woman, an indigenous leader, a 10-year-old boy— appeared on the front page of the New York Times. A week later, an image of that same ramp, traditionally a symbol of the peaceful transition of power, once again was featured above the fold, but this time it was of the structure overrun by a horde of extreme far-right insurrectionists, supporters of defeated former President Jair Bolsonaro, who lay siege to Brazil’s capital.

Thousands of rioters, described by Brazilian media, pundits, and politicians as “terrorists,” invaded and ravaged not one, but three government buildings in the capital’s Three Powers square: the Supreme Court, Congress, and Palácio do Planalto. Hijacking the colors of the Brazilian flag for their coup-mongering purposes, these so-called patriots filmed themselves as they stormed the headquarters of the Brazilian government, even as police officers escorted and allowed them entrance. They left a trail of destruction and violence behind: vandalizing a gallery with photos of former presidents, irreparably damaging invaluable works of art, trashing the Supreme Court ceremonial room, stealing a copy of the 1988 Constitution and weapons, and physically assaulting journalists. They held signs calling for military intervention and, in English, demanded a “source code” for the electronic voting machines they baselessly blamed for Bolsonaro’s defeat. On Monday morning, the Brazilian Congress building looked as if it had been hit by a bomb.

With revolting and gut-wrenching images of destruction that were eerily evocative of the January, 6 invasion of the US Capitol, what transpired was far from surprising. Several experts in the United States and Brazil have noted that Sunday’s violence is the product of a transnational far-right movement. For weeks after Bolsonaro’s defeat, his fanatic followers who bought into the collective delusion of stolen elections engaged in various forms of civil disobedience: blocking roads, attacking police headquarters, and camping outside the army headquarters in Brasília and elsewhere in the country. Their convictions were similar to those who believed Donald Trump’s “Big Lie,” and these were crafted and fueled over time by their leader and US-based far-right demagogues. “Just as Bolsonaro is a cheap imitation of Trump, this was a cheap imitation of the [US] Capitol [invasion on January 6, 2021],” Lula’s former Foreign Minister Celso Amorim told the Guardian.

Pro-Bolsonaro groups organized the “retaking of Brasília” out in the open on social media platforms, including Twitter, with messages for supporters to mobilize and board caravans to go to the capital. There is little room for doubt about the premeditated nature of their actions. “(We must) do what the people of Sri Lanka did,” one Telegram user wrote last Tuesday, “take power into our hands.” Other posts appearing in pro-Bolsonaro networks asked users not to share photos of the buses or places of origin to avoid detection by authorities. Several talked about “dying for Brazil.” One rioter told the Guardian that “the idea was to get rid of Lula.” Among those present in the capital were a nephew of Bolsonaro, politicians from his party, and a former public servant who called Gettr’s Jason Miller “the man” in a social media post from the 2022 CPAC Brazil.

“Contrary to what typically occurs in attempted coup d’états, the assault on the Brazilian government was publicly announced.”

“Contrary to what typically occurs in attempted coup d’états, the assault on the Brazilian government was publicly announced,” Iria Puyosa, a senior research fellow at the Atlantic Council’s Digital Forensic Research Lab, writes. “The call was not made on fringe or secret sites but in public groups and channels with thousands of followers. Videos, flyers, and texts indicating places and times of departure for Brasília, age requirements to participate, necessary supplies for the trip, and the objective of the mobilization circulated on TikTok, YouTube, public Telegram groups, and public WhatsApp groups for several days.”

In the days leading up to January 8, organizers used coded hashtags and expressions—like the “BrazilianSpring” coined by Steve Bannon, who has reportedly been advising Bolsonaro and encouraged him not to accept the result of the elections—to coordinate the attack. Prior to the insurrection, Brazil’s intelligence agency issued warnings about the threat of violence and attempts to take over government buildings, according to Brazilian media reports. Still, just before the violent occupation took place, Anderson Torres, Bolsonaro’s former minister of justice and the Federal District head of security told the governor of Brasília that “everything was quiet.” Torres, who, like Bolsonaro, is currently in Florida, has been fired and Governor Ibaneis Rocha has been removed from office for 90 days per a Supreme Court order. The invasion, Justice Alexandre de Moraes wrote, “could only occur with the consent, and even active participation, of authorities responsible for public safety and intelligence, as the organization of the supposed demonstrations was a notorious and known fact, disclosed by the Brazilian media.”

On Sunday evening, police forces were able to retake control of the government buildings after President Lula decreed a federal intervention over public safety. Lula, who has called for an emergency meeting with governors, said Bolsonaro was responsible for encouraging the rioters and vowed to punish all those involved. At least 1,500 people have been arrested as the police dismantle the encampments, and some are starting to provide information about having received funding from “agro people,” in reference to the agriculture sector overwhelmingly supportive of Bolsonaro. Several crowdsourcing investigation efforts have cropped up on social media in an effort to identify the insurrectionists and assist the Ministry of Justice, which has created a channel to receive information. On Monday afternoon, Minister of Justice Flávio Dino said several crimes had been committed, including attempted violent abolition of the Democratic State of Law.

“God blessed Brazil yesterday because we didn’t have any deaths,” Dino said, “despite the irresponsibility of those who instigated it. Yesterday we lived through the Brazilian Capitol. With two differences: nobody died here and we have more arrests than there, much faster.”

The FBI Is Starting to Look a Bit Like the KGB