UPDATE: As The Washington Post reports in a story about Georgia Senate candidate Herschel Walker:

With polls showing Republican candidates underperforming the fundamentals in several key Senate races, Walker — for all his previous problems, which were many — hasn’t lagged as badly as some. And just two weeks ago, Senate Minority Leader Mitch McConnell (R-Ky.) named Georgia and Nevada as the GOP’s best pickup opportunities, apparently over others in Arizona, Colorado and New Hampshire. [Pols emphasisi] 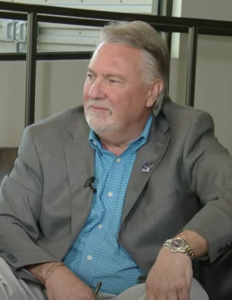 One of the most persistent — and bizarre — storylines this fall has been the steady stream of national publications writing about Colorado’s U.S. Senate race as though it just might be an opportunity for Republicans to pick up a Senate seat.

Multiple national outlets, from The Washington Post to The New York Times, have published stories in recent months considering whether the underfunded and little-known Republican Joe O’Dea could knock off incumbent Democrat Michael Bennet in November. Every single one of these stories follow the same basic script:

It’s uncanny, and it’s as pointless as responding to one of those spam text messages that just says, “Hi.”

The latest national reporter to embark on this paint-by-numbers journey is Caroline Vakil of The Hill newspaper:

Republicans are hoping Colorado Senate candidate Joe O’Dea’s move to distance himself from the more extreme elements of the party will help them pull off a win in what could be a potential sleeper race come November.

Republicans argue that by branding himself as a moderate, O’Dea will appeal to critical voting blocs in the state, like independents and Hispanic voters, even if some in the party acknowledge he likely faces an uphill climb.

“I think that those same unaffiliated voters that voted so overwhelmingly for Democratic candidates in ‘18 and ‘20 are ready to look at Republican candidates in 2022. And I think Joe O’Dea is the perfect kind of candidate to appeal to them,” said Dick Wadhams, a former state GOP chair. [Pols emphasis]

This quote from former Republican State Party Chair Dick Wadhams is perfectly emblematic of the kind of response that national publications include in their stories about Colorado’s Senate race. Wadhams is quoted because he presumably knows what he’s talking about after spending 400 years in Republican politics, although the last time Wadhams was involved in a winning scenario for the GOP was when Wayne Allard was a U.S. Senator.

If you’re asking yourself, “Who in the hell is Wayne Allard,” then you’re getting what we’re putting down here.

Democrats have absolutely CRUSHED Republicans in Colorado in the last two election cycles, but Wadhams says things will be different in 2022 because…um…well…

Darryl Glenn was a called a “unicorn,” too.

This is all the same fact-free punditry from the same Republicans who keep losing big races in Colorado year after year after year. For example, Axios published a story about O’Dea this summer calling him a political “unicorn,” which is the same thing that some pundits said about Republican Senate candidate Darryl Glenn when he was running against Bennet in 2016.

There’s absolutely no logical reason to suspect that 2022 will be different for Republicans than 2018 and 2020, particularly when they are running the same program again and again. We learned today, for example, that former Republican President George W. Bush will host a fundraiser for O’Dea later this month. In 2018, Bush showed up in Colorado in October to raise money for Republican gubernatorial candidate Walker Stapleton, who went on to lose to Democrat Jared Polis by nearly 11 points. Bush isn’t even going to bother coming to Colorado for O’Dea; that fundraiser will be held in his home state of Texas.

In fact, there’s more reason to believe that 2022 might actually be WORSE for Colorado Republicans than it has been in recent cycles. The GOP’s top-ticket candidate, gubernatorial nominee Heidi Ganahl, is a complete lunatic whose campaign somehow gets worse the closer we get to Election Day and threatens to drag other Republicans down with it. Even Republican Rep. Lauren “Q*Bert” Boebert could be in trouble in November, and CO-03 is a district that last elected a Democrat in 2008.

Ganahl isn’t getting any financial help from national Republicans, and neither is O’Dea; the top two Republican campaigns in Colorado are running on fumes. Republicans are pouring millions of dollars into states like Georgia (for Herschel Walker) and Pennsylvania (for Dr. Oz), both of which have terribly-flawed Senate candidates but are still considered more winnable than Colorado. This is the most telling stat of all: National Republicans have spent all of about $100,000 on O’Dea; they’ll spend more than that in Georgia today. 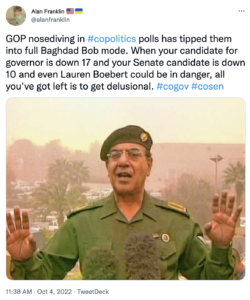 Again, none of these national stories about O’Dea have translated to an increase in support, because nobody actually believes that O’Dea has much of a chance. Polling consistently shows Bennet with an 8-10 point lead, and the incumbent Democrat has outraised O’Dea by orders of magnitude. O’Dea’s campaign has, for several weeks, been buying television ad time on a weekly and sometimes daily basis because it doesn’t have the resources to do anything else.

Thus, The Hill ends up right where all of the other national publications land: In reality.

Indeed, Colorado has not been particularly kind to Republican candidates in recent years. Hillary Clinton won the state against former President Trump by roughly 5 percentage points in 2016, and President Biden won it in 2020 by more than 13 percentage points.

The last time Republicans won a Senate seat in the Centennial State was back in 2014, when Cory Gardner ousted Sen. Mark Udall (D). Gardner later lost reelection to Sen. John Hickenlooper (D) in 2020…

…While Democrats — and even some Republicans — believe that Bennet will ultimately prevail in November, they note the political headwinds their party still faces. [Pols emphasis]

Taking a dozen different positions on abortion rights or supporting Trump makes O’Dea different than some other GOP candidates, but it doesn’t make him any better.

All of these national stories start out with an interesting premise but end up with the same inevitable conclusion. In that way, at least, they have captured the true essence of O’Dea’s campaign for Senate.