— We are making 10 House rating changes, 9 of which benefit Republicans.

— Our overall best guess at the net change in the House — a GOP gain somewhere in the 20s — remains unchanged.

— We don’t see a huge impact, so far, from the Supreme Court’s landmark abortion opinion.

The race for the House

It has been roughly a month since the U.S. Supreme Court’s Dobbs vs. Jackson Women’s Health Organization decision, which overruled past Supreme Court decisions recognizing a constitutional right to abortion.

The decision has perhaps made some difference in the electoral environment, although likely only at the margins.

House generic ballot polling, which is tracked by both the RealClearPolitics and FiveThirtyEight trackers, is a bit closer now than it was the day of the Dobbs decision, June 24. The former has moved from a Republican lead of about 3.5 points to a GOP lead of about 2, and the latter from a GOP lead of about 2.5 to just about half a point. Some individual surveys, such as recent ones from Fox News and CNN, have shown Democrats and Republicans expressing roughly equally high motivation to vote, although other polls show a clear GOP motivation edge: The Marquette University Law School poll — known for its Wisconsin polls but polling nationally in this survey — found an 18-point edge for Republicans on being “very enthusiastic” about voting (although the same survey only showed a narrow GOP edge on a question about certainty to vote). These motivation questions are important as we try to assess who will actually show up in November. Most generic ballot polls at the moment are only reporting results for registered voters, a larger universe of people than likely voters.

The generic ballot also has a history of underestimating Republicans; to cite just one modern example, in late July 2014, Democrats actually led in the RealClearPolitics generic ballot average. That lead did not last, though, and Republicans went on to win 247 House seats, their biggest majority since the Great Depression.

Our expectation is that a Republican lead in the generic ballot will become clearer after Labor Day and as polls shift to likely voter models. But we have to also account for the possibility that this does not happen, and that the dam does not necessarily break in favor of Republicans.

Still, remember that even if the overall House vote is, for instance, just Republicans by 2 or 3 points, that’s still a shift of 5-6 points from the overall vote in 2020, which Democrats won by 3 points. So that would be a considerably different and redder environment.

Our topline assessment of the House picture has not really changed since the Dobbs decision. We continue to see the Republicans as very strongly favored to win the majority with seats to spare, as they only need to win 5 more seats than they won in 2020 (213) in order to flip the House. Our best guess is a GOP net gain somewhere in the 20s. Something lower than that would be, in our view, not that bad for Democrats given how we see the political environment, as it would put them in the position of holding the Republicans to a relatively small House majority (low 230s or even 220s) that could be vulnerable in the 2024 election. If Republicans get over 30 — which is certainly within the realm of possibility and would represent a strong showing — it would give them a bigger cushion for 2024 and beyond. A 35-seat net gain would put the Republicans at 248, surpassing 2014 as the biggest modern Republican majority. The GOP continues to have a path to such a majority even if we wouldn’t project it at this point (we looked at that path earlier this year, and we will do so again).

In a midterm environment such as this one, the opposition party has the clear advantage in terms of “nationalizing” races, running on national themes like dissatisfaction with President Biden (whose approval rating is languishing in the 30s) and issues such as inflation and gas prices. Republicans will in fact lean heavily on these themes, which are potent. But one wrinkle, thanks to Dobbs, is that Democrats have a nationalizing message of their own, on abortion rights. Hypothetically, the Dobbs decision could make it easier for Democrats to do what any party in power wants to do in a midterm but is often unable to do — make the election more of a choice than a referendum by focusing the electorate on the deficiencies of the out-of-power party and/or its candidates. Some combination of what Democrats argue is GOP extremism on abortion and other issues (perhaps related to the Jan. 6 insurrection investigation) could help Democrats in certain races make the election more of a “choice.” Democratic incumbents also have, in many instances, gigantic fundraising edges over their Republican challengers — the money spigot that Democrats turned on in 2018 remains on full blast. Money won’t shape the entire race for the House, and outside spending will be heavy on both sides, but if Republicans don’t end up doing quite as well in the House as they hope, perhaps money will be part of the reason (just as money helped explain why Democrats did so well in 2018).

All told, we have 10 rating changes this week, all but 1 of which favors Republicans. Let’s go through those and then take a look at the overall rating picture.

First off, we are pushing a couple of open-seat Toss-ups, CO-8 and NC-13, to Leans Republican. Both are basically new seats in the orbit of big urban areas: CO-8 runs north of the Denver area while NC-13 runs south of Raleigh, and each are politically marginal: Joe Biden won CO-8 by about 4.5 points (basically his national margin), and NC-13 by a little under 2 points; Democratic Senate candidates did a little worse in each district in 2020 races. If you just go by the candidates and their pocketbooks, these districts should remain in Toss-up: Democratic nominees state Rep. Yadira Caraveo (CO-8) and state Sen. Wiley Nickel (NC-13) have big cash on hand advantages over, respectively, state Sen. Barbara Kirkmeyer and former college football player Bo Hines. However, these are also the kinds of seats that often vote for the opposition party in midterms: open, closely-contested districts. There’s also a decent chance that GOP Senate candidates will carry each of these districts in their states’ respective Senate contests this year, perhaps giving some additional cover to these Republican House candidates. We came close to moving CO-8 to Leans Republican after Kirkmeyer won her primary on June 28 — Democrats were hoping to run against a more conservative candidate and spent some money in the primary to try to make that happen, as they have done in so many races this cycle — but we decided to hold off because that primary was held in the immediate wake of the Dobbs decision. But at this point, we think it’s time to start pushing some of these marginal, open seats into the Leans Republican category, and we are starting with these. Others to watch in this group include IL-17, OH-13, and PA-17, although for various reasons we are keeping all 3 as Toss-ups for now.

We are pushing another open seat in Colorado, CO-7, from Likely Democratic to Leans Democratic. As we’ve written in the past, we sometimes see huge midterm shifts toward the opposition party in open seats, and while this is a fairly blue district (Biden won it 56%-42%), it’s not unwinnable for Republicans under the right circumstances. It appears that this race will, at the very least, become engaged this fall: If Rep. Ed Perlmutter (D) was seeking another term here, we doubt we’d be making this change, but he is retiring. We’re making the same move in CT-5, where Rep. Jahana Hayes (D) is seeking a third term. Republicans have zeroed in on this district, which is probably the most competitive in Connecticut, along with a few other seats in New England as they try to end their shutout in this Democratic-leaning region.

While Democratic incumbents generally outraised Republicans across the competitive districts in the second quarter of 2022, one exception was in IN-1, where first-term Rep. Frank Mrvan (D) was surpassed by Air Force veteran Jennifer-Ruth Green (R). This working-class, post-industrial northwest Indiana district has seen its Democratic lean erode in the Donald Trump era, even though Biden still carried it by 8 points. But Democrats have been losing ground in these kinds of districts in recent years, so we’re calling it a Toss-up now. This district is covered by the Chicago media market, so the ad wars could get pricey, although it may be that the most competitive race in the Chicago media market is this one, which is taking place across the Illinois border in Indiana.

One ratings upgrade we’re making for Democrats comes in southwest Georgia in the district held by long-serving Rep. Sanford Bishop (D, GA-2). Some national Republicans were excited about the candidacy of veteran Jeremy Hunt, but he lost a primary runoff several weeks ago, and we think the district has faded as a potential Republican target. One other consideration is that even if both lose, Sen. Raphael Warnock (D-GA) and gubernatorial nominee Stacey Abrams (D) are nearly certain to carry this district in their statewide races, which helps insulate Bishop.

Finally, we’re moving several Trump-won seats that Democrats do not appear to have the bandwidth to compete for this cycle from Likely Republican to Safe Republican: the open seats FL-4 and FL-7, as well as the seats held by Reps. Carlos Giménez (R, FL-28) and Bryan Steil (R, WI-1). FL-4 and FL-7 are reconfigured districts that were targeted by Florida Republicans in their gerrymander of Florida; we’re counting them as flips because Democrats currently hold versions of each seat. We mention this as a way of pointing out a change to our competitive House rating tables: While we typically do not list any districts rated as Safe, we are listing a few Democratic-held seats that are easy Republican pickups because of redistricting. This change comes as the result of popular demand (and by popular demand, we mean that a few astute readers asked us if we could do this for their own record-keeping purposes, and we’re happy to oblige). Our updated ratings are shown in Table 2 below.

Overall, these changes push the Republicans ever so close to the magic number of 218. We now rate 217 districts as Safe, Likely, or Leans Republican, while there are 191 rated as Safe, Likely, or Leans Democratic. That leaves 27 Toss-ups; splitting these relatively equally, 14-13 Republican, would put the GOP at 231 seats, or a net gain of 18. That said, we expect the Republicans will do better in the Toss-up column than just a split, which is why our best guess is a GOP gain of somewhere in the 20s.

The last time we made a bunch of House ratings at one time was in mid-April. Back then, we also had 27 Toss-ups — redistricting was not yet complete, so that involved a little bit of guesswork — and Republicans would have needed to win 20 of those to net 17 seats. Now they would net a similar number of seats just by splitting the Toss-ups.

So the movement in our House ratings continues to be toward Republicans. 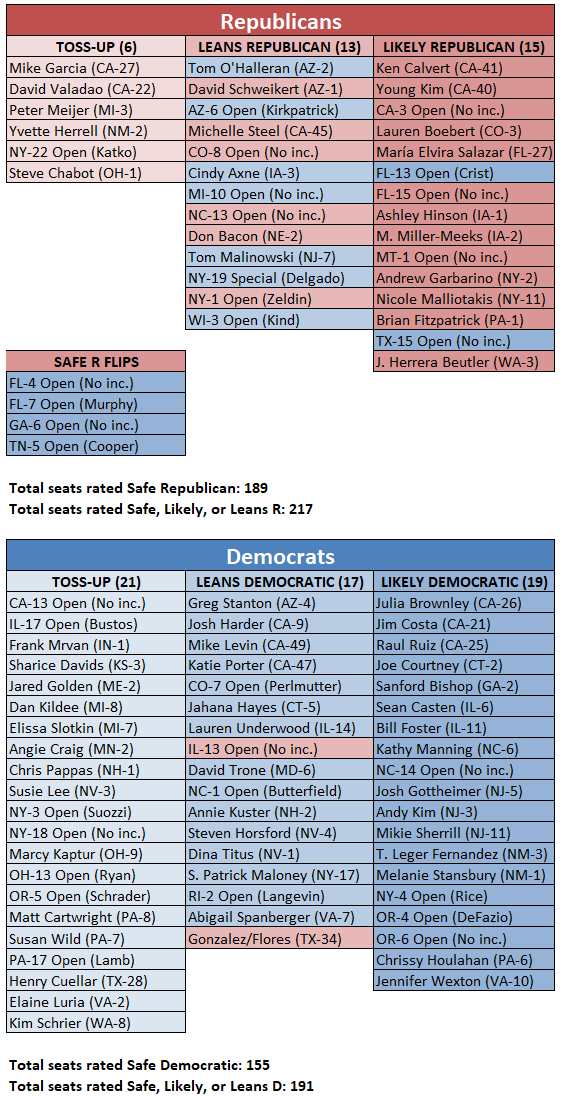 These 2020 Election Deniers Are Running For Office In Arizona