No, They Haven’t. (Mastriano Silent on Right Wing Political Violence)

As far as I can tell (with a search on each at google and twitter) neither St Sen Doug Mastriano or Rep Guy Reschenthaler have had the decency to denounce the hammer attack on Speaker Pelosi’s husband Paul.

On the other hand, over at the Mastriano-controlled FB page Mastriano Memes, they’re spreading the latest Pelosi attack conspiracy theory. 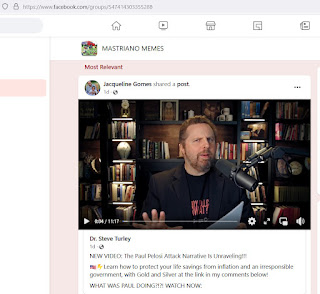 Why do I say that it’s Mastriano-controlled?

Republican Pennsylvania governor candidate Doug Mastriano’s
official campaign Facebook account is also helping with another group
on the social media site: a Facebook group which has for months featured
a stream of xenophobic, transphobic, and antisemitic memes.

The campaign’s role in the public group—called “Mastriano Memes”—has not been previously reported, but Mastriano’s official Facebook account was still an active administrator for the page as of Monday evening.

Got it. More info on who St Sen (and now GOP cand for PA Gov) Doug Mastriano really is.

Remember some people criticizing the Democratic 'message'? Yeah they were all wrong