Yes, I know there are other atrocities in this fair land of ours.

The GOP, the self-proclaimed party of freedom and limited government, has
begun to utilize the vast resources of the US Government to dismantle freedom
in the USA.

First they came for the uteri and now it’s been telegraphed that they’ll
punish any sex (or gender) they find icky.

In the meantime there are other, less-existential, problems facing us.

And as long-term readers of this blog know, PA State Senator (and now GOP
candidate for PA Gov.) Doug Mastriano is one of them.

Let’s back up a moment to take another look at
the subpoena the January 6 Committee sent him
earlier this year.

Based on your public statements, we understand that you were present during
the attack on the U.S. Capitol on January 6, 2021, and that you witnessed
“agitators…getting in the face of the police” and “agitators…start pushing
the police up the [Capitol] steps.”

We would like to better understand these
statements and expenditures, events that you witnessed or in which you
participated, and communications we believe you may have had with national,
state, and local officials about the outcome of the November 2020 election.

So the committee is looking for documents related to agitators at The Capitol on January 6. Got it.

Take a look at this picture: 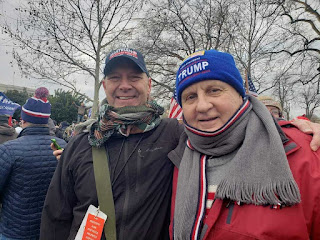 The gentleman on the left is Doug Mastriano.

(That’s a funny because in a different context, none of those nouns are correct.)

Anyway look at what he’s wearing – the hat and the scarf.

Now look at this: 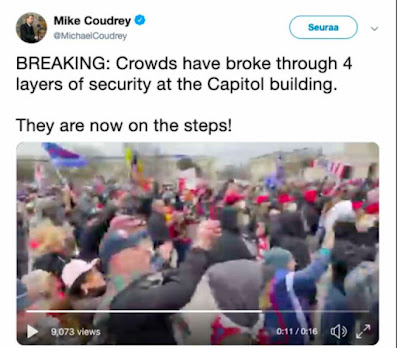 Look at the gentleman in the image, center left (ha! the same funny applies!!). Notice the hat and the scarf on the man holding up what looks to be a camera.

Isn’t that PA State Senator (and now GOP candidate for PA Gov) Doug Mastriano? And isn’t he taking pictures of an event described by GOP activist Mike Coudrey as “Crowds have broke through 4 layers of security”?

Did he release to the January 6 Committee whatever images he may have taken that day?

A national group dedicated to electing Democratic
governors is pressuring Pennsylvania’s Republican nominee for governor
to turn over any video footage he may have recorded while in Washington,
D.C. on the day of the Jan. 6 insurrection at the U.S. Capitol.

The Democratic Governors Association, citing a photo recently unearthed of Mastriano in Washington on Jan. 6, called on him to release any photos or video he may have taken while on the Capitol grounds. The screenshot referenced by the organization appears to show Mastriano taking photos or video with his cellphone as supporters of former President Donald Trump began to storm the Capitol on Jan. 6, 2021.

What say you, Senator? Did you take any pictures that day? Did you turn them over to the committee like the subpoena asked you to?

Can we see them?

Cassidy Hutchinson ALSO Lied about Handwritten Note in Testimony — And Liz Cheney KNEW IT WAS A FALSE because the Actual Author of the Note Testified It Was His! – DavesPaper.com

Trump-era changes to Endangered Species Act thrown out by judge

Trump-era changes to Endangered Species Act thrown out by judge

Democrats Bracing Themselves For More SCOTUS Decisions They Don't Like