— While it’s easy to begin looking towards the 2024 election cycle, 3 states will have gubernatorial contests this year.

— In Kentucky, Democratic Gov. Andy Beshear remains personally popular, but he will be running in a red state with a large GOP bench.

— Louisiana and Mississippi should be easier contests for Republicans. Term-limited Gov. John Bel Edwards (D-LA) will be hard for Democrats to replace, while Mississippi, where Democrats have not won a gubernatorial contest this century, will also be an uphill fight for them.

With the 2022 midterms finally in the books, it’s time to start looking to the 2024 presidential race.

Just kidding. While we will have no shortage of 2024 content on tap, 2023 will see many of its own elections. In our own backyard, this November’s legislative races in Virginia, where each party narrowly controls a chamber of the legislature, will have implications for the commonwealth. Democrats may be feeling more confident after Tuesday night, as they flipped a marginal state Senate seat in the Virginia Beach area. With the legislative session now underway, this will up their majority in the chamber from a bare 21-19 to 22-18.

Looking elsewhere, our neighboring commonwealth, Kentucky, as well as a pair of states in the Deep South, will elect governors this year.

In 2019, then-state Attorney General Andy Beshear (D) narrowly beat then-incumbent Gov. Matt Bevin (R). Bevin was originally elected in 2015 to replace Beshear’s father, who was term-limited as governor. Bevin, an anti-establishment conservative, burnt a few too many bridges during his term and, despite the state’s friendly lean, was weighed down by poor approval ratings.

Now, facing reelection himself, Beshear is in essentially the opposite situation as Bevin was 4 years ago. According to Morning Consult’s April 2022 polling, Beshear was the most popular Democratic governor in the country. In Morning Consult’s more recent October 2022 poll, he retained that title. But Kentucky is also the reddest state (by 2020 presidential results) that currently has a Democratic governor — so, as impressive as Beshear’s approvals are, they are not necessarily enough to guarantee reelection.

On Friday, filing for the gubernatorial contest closed. On the Republican side, about a dozen candidates, including 3 current statewide officials, filed to run in the May 16 primary. Though Kentucky has the earliest primary of the 3 states that will elect governors this year — in other words, Republicans won’t be beating up on each other into the fall, as has been the case in recent Louisiana races (more on that later) — state GOP consultant Scott Jennings quipped that “crazy things” could happen.

Still, the nominal frontrunner in the Republican contest is Daniel Cameron, who currently holds Beshear’s old job as state Attorney General. Cameron, a Black Republican who is 37 and has connections to Senate Minority Leader Mitch McConnell (R-KY), first ran for office in 2019 — he easily defeated then-state Rep. Greg Stumbo, an Appalachian Democrat who had a lengthy resume in state politics. As Beshear did with Bevin, Cameron has battled the governor while in office, most notably on COVID measures. Shortly after Cameron entered the race, last May, he received Donald Trump’s endorsement.

The other statewide Republicans who are running for a promotion are Auditor Mike Harmon and Agriculture Commissioner Ryan Quarles. Harmon first got to office in something of an upset, defeating then-Auditor Adam Edelen, who was thought to be a rising star in state Democratic politics (Edelen later lost to Beshear in the 2019 gubernatorial primary). Quarles has fundraised competitively with Cameron, while Harmon’s totals have been less impressive. Kelly Knight Craft, who served in the Trump Administration as ambassador to Canada and then to the United Nations, is another serious Republican. Craft is both a billionaire and an ample fundraiser, so money should not be an issue for her campaign.

Beshear, although he is expected to win his primary easily, will have 2 opponents, the more notable of whom is Geoff Young. A perennial candidate, Young has been denounced by fellow Democrats for, among other things, his pro-Vladimir Putin stances. In any case, the non-Beshear vote in the primary will likely be a protest vote more than anything else.

Aside from the potential for a chaotic Republican primary, there are more local factors working in Beshear’s favor. In 2017, the Crystal Ball looked at the types of political implications that natural disasters can have. Governors who are perceived to handle disasters well often get an electoral boost. Last year, though he was already favored, Gov. Ron DeSantis’s (R-FL) response to Hurricane Ian likely padded his margin. Since 2019, Kentucky has been hit by tornadoes in the west, while the Appalachian east has seen historic flooding. Beshear’s responses to the state’s crises have enabled him to cultivate something of a postpartisan image.

The 2022 election cycle, at least in terms of its partisan results, was not especially kind to Kentucky Democrats: though they retained representation in the federal delegation by holding the open and very Democratic Louisville-based KY-3, Republicans expanded their already-robust majority in the state House — the GOP captured 80 of the chamber’s 100 seats. But the result of one of last year’s state referendums may give Democrats more encouragement. Amendment 2 was supported by many prominent Republicans — if passed, it would have confirmed that the state constitution does not guarantee a right to abortion. Amendment 2 failed by close to 5 points, as Map 1 shows. 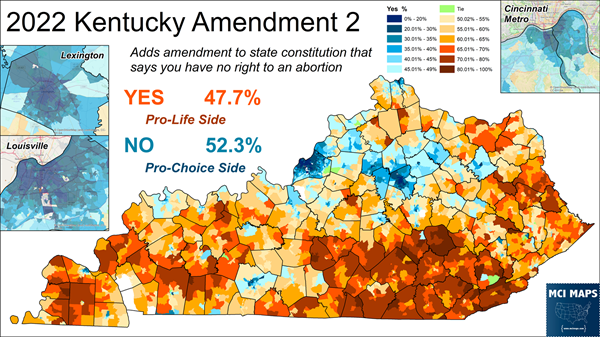 Though the status of abortion in Kentucky is being settled in the courts, from a purely electoral perspective, the anti-Amendment 2 vote may provide something of a template for a Beshear win this year. The state’s 2 largest counties, Louisville’s Jefferson and Lexington’s Fayette, both voted over 70% against the amendment — in 2019, Beshear himself received about two-thirds of the vote in each of those large counties. (Those are the pockets of dark blue on the map.) The 3 northernmost counties, which are in Cincinnati’s orbit, also voted, in aggregate, against Amendment 2. Beshear’s overperformance in northern Kentucky was key to his 2 previous statewide wins. It is hard to transfer every element of a referendum to an actual partisan contest, but a similar vote in Kansas last summer presaged Gov. Laura Kelly’s (D-KS) victory in another red state.

Considering the governor’s personal popularity and the potential for uncertainty in the Republican primary, we are starting Beshear off as a slight favorite and calling the Kentucky contest Leans Democratic.

Going alphabetically to the next state up this year, the author’s home state of Louisiana will be a considerably harder hold for Democrats. In 2015, Republican missteps gave then-state Rep. John Bel Edwards (D) an opening. Edwards has his own strengths as a candidate — for one, his opposition to abortion rights was electorally helpful — but he was running against a personally disliked Republican in a race to replace a deeply unpopular Republican. In 2019, Edwards, who kept healthy approval ratings, won reelection despite Trump’s efforts against him. But with the incumbent term limited this year — he could run again, but must wait 4 years (something the late governor Edwin Edwards was fond of doing) — Democrats are struggling to find an Edwards-caliber replacement.

As a refresher, under the state’s jungle primary system, candidates from all parties will appear on the same October ballot and a runoff occurs if no one clears 50%.

Last week, Sen. John Kennedy (R-LA), who was just reelected to a second term in the Senate, ruled out a run. Though this was our expectation — there was also buzz of a 2019 Kennedy run that ultimately went nowhere — Kennedy’s absence will likely act as a green light for others to enter the race.

For now, state Attorney General Jeff Landry is the leading Republican in the field. A bombastic Cajun, he served a term in Congress as a Tea Party-aligned candidate before winning his current office in 2015. Landry has been a thorn in the side of the governor, suing the administration on matters ranging from COVID measures to fiscal policy.

Last month, Landry convinced the state party’s central committee to endorse him — that makes him, in effect, the official GOP nominee. Given the jungle primary system, it’s common for Louisiana’s 2 major parties to wait until the runoff stage of the election to formally endorse candidates. While this may help establish Landry’s status as a frontrunner, other Republicans have decried the endorsement as insider-politicking.

State Treasurer John Schroder and state Senate Republican leader Sharon Hewitt are viewed by some as conservatives who lack some of Landry’s baggage. Schroder is already in the race while Hewitt is reportedly considering a run.

On Monday, Lt. Gov. Billy Nungesser (R), who was widely expected to run, surprised state politicos by announcing that he’d run for reelection. The chief job of the lieutenant governor is to promote tourism, which often involves attending festivals — so we can’t say we really blame him for wanting to stay put. In any case, Nungesser is on decidedly better terms with the governor than Landry is, and his absence leaves the center-right lane open.

Rep. Garret Graves (R, LA-6) would seem the likeliest potential candidate from the state’s House delegation: he has a sizable war chest and hails from a district that already covers the state’s 3 most populous media markets. During last week’s votes for speaker, he negotiated with the holdouts on behalf of now-Speaker Kevin McCarthy (R, CA-20). Graves may face some pressure from leadership to stay in the House, though: if any flair-ups with the conference’s more rebellious members arise, McCarthy would probably prefer to have Graves in DC than in Baton Rouge.

Louisiana has one of the latest filing dates in the country (this year, it will be Aug. 10), so legislators from either side have time to consider the race. For now, Shawn Wilson, who is serving as Edwards’s transportation secretary, may be the most obvious Democratic candidate. State Democratic Party Chair Katie Bernhardt is also reportedly considering the race.

We are starting Louisiana off as Likely Republican. Essentially, Louisiana may be a mirror image of Maryland: last year, popular Gov. Larry Hogan (R-MD) was term-limited — Hogan, like Edwards, had proven crossover appeal, but once he was off the ballot, the state reverted to its usual partisanship.

In 2019, then-Lt. Gov. Tate Reeves (R) was the Republican frontrunner — he garnered endorsements from the state’s last 2 GOP governors. But Reeves drew a couple of primary opponents, the more notable of whom was Bill Waller Jr., the son of a 1970s-era governor. Waller ran as a more moderate alternative to Reeves — he embraced Medicaid expansion — and forced a runoff. Reeves won 54%-46%; he fared poorly in the Jackson area but carried most of the rest of the state.

Waller is reportedly considering another run. There has also been speculation that some other prominent Republicans, namely state Speaker of the House Philip Gunn and Secretary of State Michael Watson, may run. Mississippi’s filing date is Feb. 1, so the field should be set relatively soon.

Democrats put their best foot forward in 2019, but still came up a few points short. Then-Attorney General Jim Hood was the sole statewide Democrat — he ran against Reeves and took 47%. For 2023, the party’s best potential nominee seems to be Brandon Presley (who is distantly related to the late King of Rock and Roll). Presley represents northern Mississippi on the state Public Service Commission. Presley is popular in his deep red district, but he has not announced plans for 2023.

Reeves is not an especially popular governor — the Morning Consult October poll mentioned above put his approval rating at a slightly negative 42/48 spread. Developments like the water crisis in the state capital of Jackson and a scandal surrounding former football star Brett Favre are giving Reeves’s opposition, on both sides, fodder.

Still, we’re calling Mississippi Safe Republican, although if Democrats produce a credible candidate by the filing deadline, we’ll be open to reconsidering.

Although Kentucky, Louisiana, and Mississippi are all safely red states in presidential elections, the trio hasn’t voted in tandem for governor since 1987 — and they all elected Democrats that year. If Republicans sweep all 3, it would be historic, but they have their work cut out for them, at least in Kentucky.