The fundamental flaw in our economy 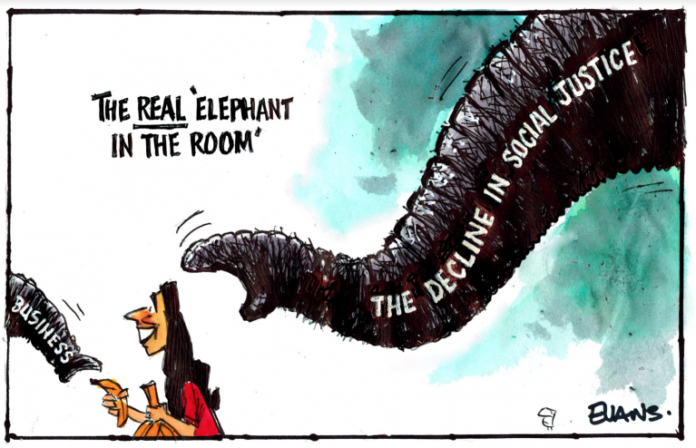 Natural at the moment is still neo liberalism. The big push in the 1980s (Reagan/Thatcher/Friedman) to deal with inflation and needs was to appeal to focusing on supply side economics. This meant reducing regulations and taxes on businesses, the creators and suppliers of goods and services, allowing them to grow and thus grow the economy, and so people would be supplied with what they need. Over 40 years later the sceptics have been proved 100% right.  You can’t grow an economy if your people can’t pay for goods and services (they forgot the demand side, Keynesian economics). And what businesses want to supply and at what price; simply don’t and can’t align with what people need. (e.g. Tourist rocket trips to space, rather than health care! Millionaires want to follow their dreams, rather than the dreams and needs of ordinary people. That can change by putting money in the hands of ordinary people so they can buy for their dreams and needs to be met). But why didn’t supply side economic theory work and things just grow?

But again, why did this happen? Business were following their necessary and logical drive to maximise profits!  It happened because the fundamental rules and tax system that support and guide our economy is still based on an extractive and exploitive colonial economy model. (Many people would just say it is a growth model). This is a world wide problem.

The key mechanism through which this happens, i.e. the focus on asset accumulation as the easiest path to wealth, is that a capital asset can be purchased through a loan. Interest on the loan is deductible for tax. So even if a millionaire/business can pay for something outright it makes better economic sense to reduce tax and purchase an asset with a loan.  Loans also help in hiding the character of revenue as capital (which is not taxable) which helps in paying less tax. And an asset fixation leads to constant ‘sales’ of assets sometimes between related entities, and revaluations of assets, both to increase depreciation tax claims; and higher revaluations also allow bigger loans and more interest deductions from tax.

Because of these tax mechanisms the economy shifts into debt financing everything, i.e. not buying anything but taking out loans to buy everything. Rent cars, rent buildings etc. There are other techniques for debt. So the finance whizz kids take over the economy, this is the financialisation of 1st world economies, with industry and manufacturing production sectors moving to exploit low wages and low regulations in third world countries.

But once you take out loans to finance everything, the loan has to be secured by the value of an asset, on which the size of the loan is calculated. You can buy shares for example with loans. You take out loans against the value of shares in your company. Take out loans against the value of your assets. All helping reduce your tax bill. This is why businesses obsess over sharemarket values and why in 2008 when Obama bailed out the banks who bailed out the businesses. They pumped that money back into the share market, (the holding of capital assets) and not into the supply of goods and services to satisfy people’s needs and some wants. Trump did the same again in 2020. If the share values drop the loans become harder to sustain and the network of loans may have to be recalled.  This would happen because there is a boundary to risk.

So the economy is twisted away from the supply of goods and services to ordinary people as the way to make money and is focused on the holding of capital assets as the easiest and most profitable path to wealth. This process/mechanism is sustained by three main flaws in our colonial economy tax system.

These three are relatively easy to fix.* And when we fix it will remove most tax avoidance techniques. And it will return a comparative advantage to small low cost businesses and local production. All these are features of an economic model that is structurally better adapted to deal with climate change.

But the wealthy people, who currently benefit will fight tooth and nail to keep the flaws. Employing a small number of lawyers and accountants for millions and billions of dollars of gain. And they will threaten/deliver armageddon on any politician who proposes change.

So the experience of neo liberal Liz Truss with a collapsing economy is indicative of how this may work. In theory business should support a neo liberal politician offering rich tax cuts for a supposedly growth focused agenda. But the fundamentals of risk where too high. Huge unfunded tax cuts hint that future debts will be a big drag on the UK economy and therefore growth will slow pulling down asset prices. This puts their loans and debt financing house of cards at risk. The same will happen if the UK takes on austerity too severely. i.e. economic growth will stall and a recession will pull down asset prices.  Because of these risks corporate investors stopped buying and without their demand asset prices will drop. The Bank of England bailed it out by buying so wealthy investor asset prices stayed high. But collapsing pensions would have also been catastrophic for ordinary people.

This example shows the excessive importance of asset prices to the current economic model.  And because of potential aggressive business reactions like this Labour finance ministers and liberal centrists all over the world fear the business community; and these leaders become hostage to their own fears. So changing these three flaws does need a plan.

The main attack by the self interested will be that removing these three flaws undermines the growth economy. They will say no tax subsidy through expenses deductions means no incentive to invest in their business, innovation will stall, growth will stall. Economic collapse will follow. This is a lie because people still want to make money and the changes simply mean moving the path to wealth back to the primary purpose of an economy; to supply goods and services to ordinary people to satisfy their needs and some wants. Not a path to wealth through just holding assets.

And there will still be a share market, there will be bonds and other assets and these mechanisms can still make money. But the tax system should not have the structural incentives that currently excessively favour the holding of assets as the path to create wealth.

Clearly this asset fixation is undermining world economies. Rana Foroohors in her book ‘Makers and Takers’ in talking about the US economy say’s only about 15% of the money coming out of financial institutions now goes into business investment, i.e. into producing goods and services. The rest is spent buying and selling existing financial instruments. The production of goods and services is not getting the investment needed.  This is also seen in the 2008 financial crisis where bailout moeny was pumped back inot the sharemarket and not used to directly stimulate the production of goods and services.

This asset fixation as the path to wealth is also hugely expensive to sustain to the point it can’t be economic to keep on bailing out the sharemarket. Trillions in 2008, and trillions again in 2020 and recently with the Bank of England, billions bailing out Liz Truss. This money could have been better spent on actually providing needed goods and services for ordinary people and transitioning our economy to deal with the climate crisis. And not dealing with that crisis will collapse the economy.

All these problems apply to New Zealand as our economy is integrated with and largely follows others. We can see the holding asset problem in our fixation with property as the only path to wealth.  Labour took the excellent action of removing interest deductibility for rentals but then botched the policy by allowing ‘build to rent’ rent for life businesses to have interest deductibility for more than just building a rental. The ordinary New Zealand taxpayer is now subsiding these ‘build to rent’, rent for life businesses to the tune of hundreds of millions of dollars and potentially billions of dollars in lost tax revenue. And business people will not provide affordable housing, they must maximise profit. So government accomodation allowances will be milked by these companies taking hundreds of millions more. The stupidity and economic illiteracy of Labour on this is ….reflects poorly on their strategic thinking.

But for change to remove the flaws from the tax system; what really is to fear for the wealthy? By itself these changes to fix the flaws in the tax system would leave wealth with the wealthy which would give them a massive capacity to adapt.  But adapt they would have to. I do not reject wealth taxes or windfall gain taxes, except that without the work to fix the structural flaws in the tax system the holding of assets and the avoidance of tax will remain as powerful motivators for finance institutions meaning the current problems will come back again and again.

The purpose of an economy is to satisfy the needs and some of the wants of all people in the economy. Fulfilling this purpose should be the path to wealth and the reward for effort. But our economy is failing at this central purpose, ordinary people are not getting their needs met. This is because our tax laws have created a second easier path to wealth creation based on the holding of assets rather than the direct supply of goods of services to people.

This second path to wealth is driven by our outdated and colonial tax system which sees holding assets as likely capital and therefore non taxable, and loans against the assets can have interest deducted from tax liabilities.  This second path to wealth favours the super wealthy and encourages monopoly capitalism. But with mega concentrations of wealth the economy gets more separated from the provisions of needs for ordinary people and more into fulfilling the dreams of the mega rich.

Yes, business loans taken out based on asset values are used to support and grow businesses but the structure is unstable and dependent on asset values being high or remaining high. When the asset values fall massive amounts of investment capital is being diverted into the unproductive purpose of supporting asset values and not helping people get what they need.

This secondary path to wealth (holding assets) is unstable and hugely expensive to maintain. It is also building an inertia and lack of flexibility into the economy as seen in the inability of many business people to adapt and accept the need for change to deal with the climate crisis.

*     I have written how to implement the changes to the tax systems in my article ‘Creating the                    citizen economy’ on The Daily Blog. I discuss impacts and benefits from these quite simple changes. And they will close a lot of tax avoidance loopholes. These changes could also see tax rates significantly drop but more revenue collected.

**    The usual defence of the sharemarket and holding asset values high is that everybody’s superannuation fund relies on assets and the sharemarkets so we all benefit. True but a few benefit much more than others on this.

Just days after buying Twitter, Elon Musk fuels a surge in misinformation on the service about Pelosi attack

Just days after buying Twitter, Elon Musk fuels a surge in misinformation on the service about Pelosi attack