“You Can’t Have Your Cake And Eat It” – Mother Jones 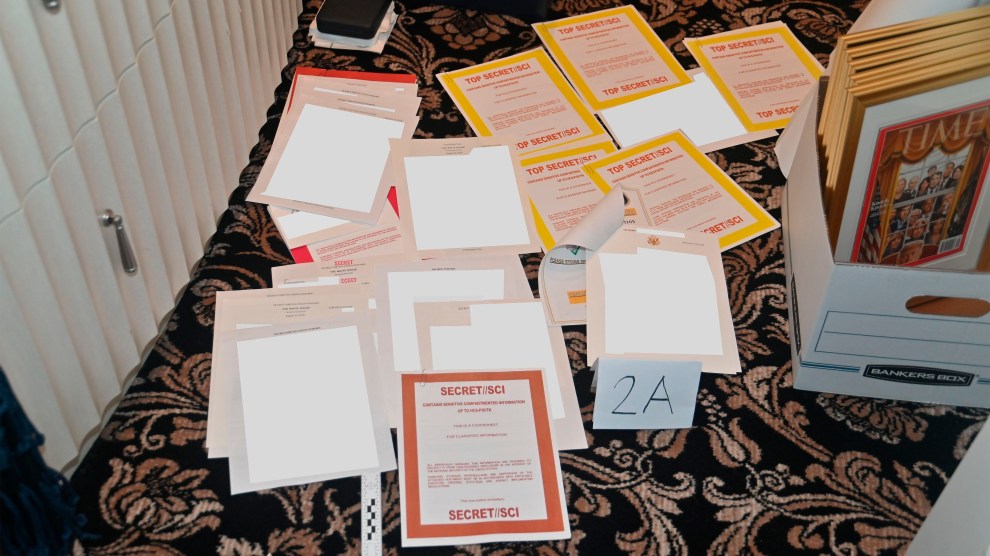 Could the phrase “TOP SECRET” in big red letters mean a document is classified? Hmm.Department of Justice/Zuma

Donald Trump’s lawyers would like you to believe that the boxes the FBI seized from the former president’s Mar-a-Lago estate last month contain Schrödinger’s documents: simultaneously classified and declassified.

Trump has claimed he declassified the documents he took to Mar-a-Lago, but he has never produced a shred of evidence to support that claim. His lawyers have hinted he may have declassified the material, but they’ve been careful not to say so explicitly. In a court filing on Monday, they even asked Judge Raymond Dearie, the special master appointed to review the documents DOJ seized, not to make them address the issue, because Trump might be charged and they don’t want to tip their hand and detail “a defense to the merits of any subsequent indictment.”

The Justice Department has a simpler position: Documents with classification markings are classified.

On Tuesday, Trump’s lawyers, while refusing to say whether the documents were classified, insisted the DOJ had not done its part to prove the documents were classified. Dearie was not having it. “If the government gives me prima facia evidence that they are classified documents, and you don’t advance any claim of declassification, I’m left with a prima facia case of classified documents, and as far as I’m concerned, that’s the end of it,” he said. “You can’t have your cake and eat it.”

Judge Dearie asks “What business is it of the court” to decide whether a document is classified. At last, someone is applying the law! Classification is a core function of the executive branch, not the judiciary. If gov says it is classified, it is classified. https://t.co/yXpbxHQZkJ

Dearie seems to be on course to call Trump’s bluff. If Trump declassified documents, his lawyers need to prove it. But while Dearie seems skeptical of Trump’s arguments, the appointment of a special master—ordered by District Court Judge Aileen Cannon, a Trump appointee—helped the former president by buying him time. Cannon drew fire from legal analysts, who noted she had given deference to a nonsensical claim of “executive privilege” by Trump, who is not the president. While such claims are usually asserted by sitting presidents to block executive branch deliberations from Congress or the public, here the executive branch seized the material from a citizen outside government.

Cannon gave Dearie until November 30 to review thousands of documents and other items seized from Trump’s residence and private club. Dearie is supposed to decide whether any of the materials are covered by attorney-client privilege, and assess Trump’s claim they are covered by executive privilege.

Dearie said Tuesday that he wants to hustle. “We have little time to complete the tasks assigned to the court,” he told the lawyers. “We are going to proceed with what I call responsible dispatch.”

But Trump’s lawyers are pressing for further delay, even as the DOJ, in a separate proceeding, appeals Canon’s order to halt its investigation while Judge Dearie reviews the seized materials.

Are the Democrats About to Introduce their Law to Safeguard the Unity of Party and State?, by Paul Craig Roberts

Big businesses trumpet ESG credentials. Scrutiny is on the rise

Big businesses trumpet ESG credentials. Scrutiny is on the rise