Biden raises the alarm over climate change: ‘We can no longer plead ignorance to the consequences of our actions’ 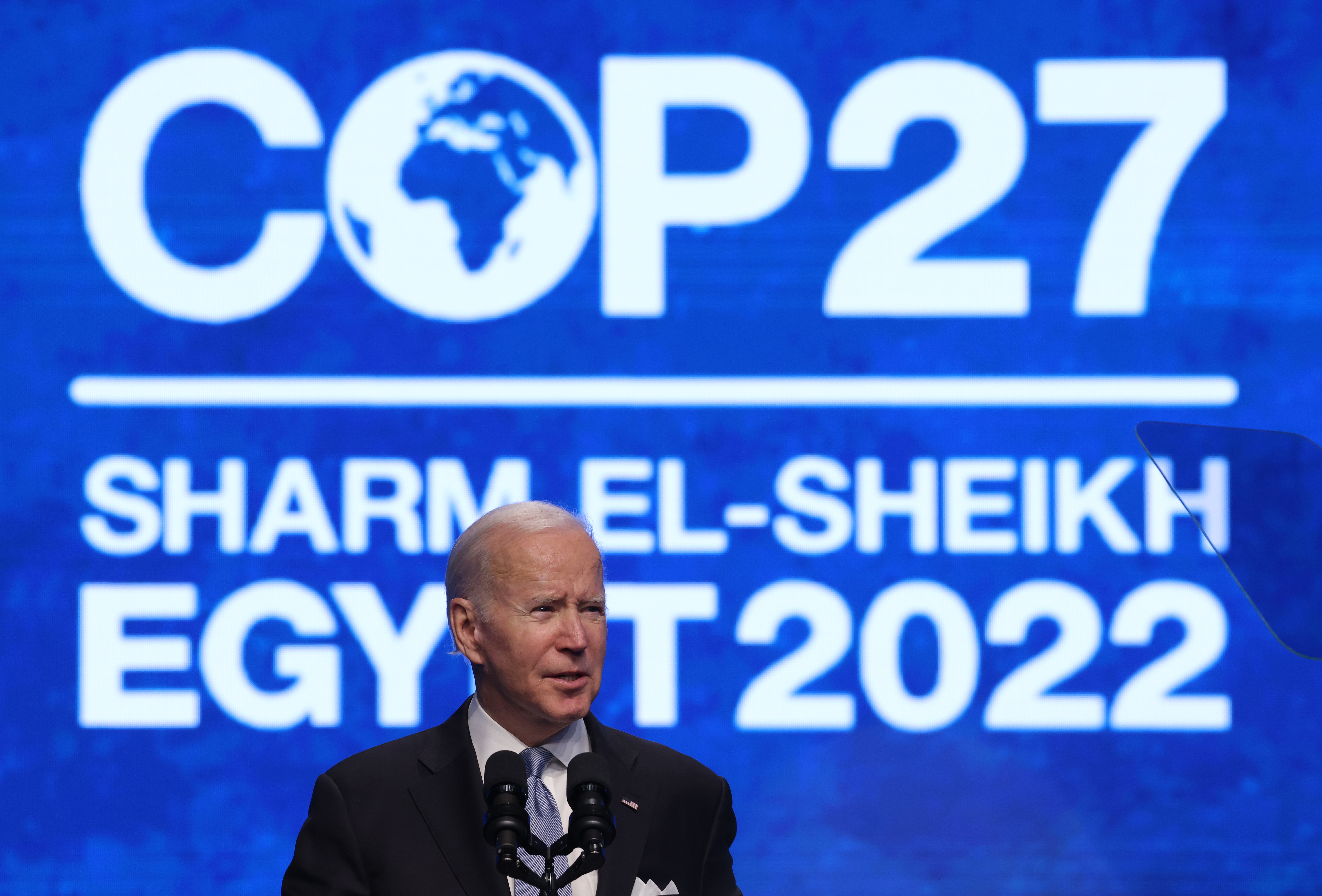 President Joe Biden, speaking Friday at an annual international summit on climate change, urged world leaders to “double down” on their resolve to fight global warming, saying Russia’s invasion of Ukraine reinforces the need to phase out fossil fuels.

“We can no longer plead ignorance to the consequences of our actions, or continue to repeat our mistakes,” Biden said.

The president’s brief attendance at the United Nations climate conference, known as COP27, was largely a victory lap as he emphasized new spending on clean energy initiatives that will “change the paradigm” for the United States and the rest of the world.

But Biden glossed over how he’s pushed for more oil and gas production to bring down costs that have been politically troublesome at home, and fueled the invasion of Ukraine by allowing Russia to fetch higher prices for its energy exports.

“This gathering must be the moment to recommit our future and our shared capacity to write a better story for the world,” Biden said.

Biden spent just three hours in Egypt, including a meeting with the country’s autocratic leader, President Abdel-Fattah el-Sissi, before continuing on an around-the-world trip. His next stop was Cambodia for a meeting of Southeast Asian leaders and then Indonesia for the annual Group of 20 summit of the world’s largest economies.

At the climate conference, Biden discussed a new supplemental rule that will crack down on methane emissions, expanding on a similar regulation his administration released last year. Methane is a potent greenhouse gas that contributes significantly to global warming.

The U.S. commitment of some $375 billion over a decade to fight climate change gives Biden greater leverage to press other nations to fulfill their pledges to reduce greenhouse gas emissions and shift the global economy toward cleaner energy sources.

“The United States government is putting our money where our mouth is,” he said.

Biden said the spending, part of broader economic legislation he signed into law this year, will ensure the U.S. hits its target for reducing emissions by 2030.

The president was in a far different position from last year’s gathering, which came about during a particularly unhappy stretch in the bill’s tortuous path to passage.

That summit resulted in additional global commitments to meet temperature targets agreed to in the Paris Climate Accord, which Biden rejoined after his predecessor, Donald Trump, pulled the U.S. from the deal.

Jennifer Morgan, Germany’s special climate envoy, said Biden “made it very clear that the climate crisis is a major top priority for the United States domestically in getting laws passed, internationally in partnership with other countries.”

She said it contributed “a positive energy coming into this conference.”

Biden argued that “good climate policy is good economic policy,” and he called on all major emitting countries to “align their ambition” to the international goal of trying to limit future global warming to 1.5 degrees Celsius (2.7 degrees Fahrenheit), according to the White House.

But even with these fresh efforts, America and the world have a long way to go to meet emissions targets that scientists hope will contain global warming. And the political will for more investment is shrinking.

Biden acknowledged that climate crises are “hitting hardest those countries and communities that have the fewest resources to respond and recover,” a reference to a leading issue at the summit.

Known as “loss and damage,” it involves asking rich countries like the United States, the top historic polluting nation, to pay what are essentially reparations for damages caused to poorer vulnerable nations that don’t emit much heat-trapping carbon dioxide.

Biden announced in his speech the U.S. would contribute $150 million “as a down payment” to initiatives to help Africa adapt to the changing climate, but that did not satisfy concerns.

“We would like for the U.S. to step up their game on loss and damage,” Sierra Club President Ramon Cruz said. “We would of course like to see more commitment to that.”

The U.S. in the past has opposed even talking about the issue, but has softened its stance and agreed to discussions. Biden’s climate envoy, John Kerry, has mentioned the issue in speeches. However, the U.S. doesn’t want liability to be part of any deal. In addition, Congress and the public have been reluctant to embrace many types of climate aid — and this is the most controversial type.

Even though Biden announced other initiatives, she said, “he couldn’t deliver what the developing world most wants: enough money to adapt to climate extremes.”

Prospects for a significant breakthrough are further dampened as major emitters such as China and India are sending less-senior delegations to the conference. Biden administration officials have tried to lower expectations for results and instead cast the meeting as a return to U.S. leadership on the issue.

Biden left Washington with votes still being tallied in key races that will determine political control of Congress. Still, the president was buoyed as Democrats performed stronger than expected.

After arriving in Egypt, Biden met with el-Sissi. The leaders discussed climate, human rights and the U.S.-Egypt defense partnership, among other issues, the White House said. The Egyptian leader proactively and publicly raised human rights with Biden before their one-on-one meeting.

“We are very keen on improving this part,” said el-Sissi, who emphasized that Egypt had launched a national strategy on human rights.

Biden and other senior officials had also planned to advocate for the release of imprisoned Egyptian pro-democracy activist Alaa Abdel-Fattah. His family said prison officials told them he was undergoing an undefined medical intervention amid a hunger strike. He was not named in the White House summary of Biden’s meeting with el-Sissi.

For his part, Biden said the U.S. and Egypt are “continuing our dialogue on human rights” and added that he hopes they’ll be “closer and stronger in every way.”

Afterward, as he walked through a hallway with el-Sissi, Biden was asked whether they had discussed Abdel-Fattah. Biden responded, “What we talked about is the relationship between the United States and Egypt.”

‘No Path’ to Victory for Hobbs

'No Path' to Victory for Hobbs

Why Did Democrats Do So Well in the Midterms?

Trump sues Jan. 6 committee to avoid testifying in the investigation