— We are moving the Senate races in Arizona and Pennsylvania from Toss-up to Leans Democratic on account of candidate weaknesses for Republicans in both states and what appears to be a not-as-bleak environment for Democrats.

— The overall race for the Senate remains a Toss-up, with 49 seats at least leaning to each party and a couple of Toss-ups overall, Georgia and Nevada.

Rating changes in the Senate

The end of the summer has been kind to Democrats. President Joe Biden’s approval rating, though still clearly weak, is improving, and House generic ballot polling shows a political environment that, at least at the moment, is roughly neutral. A few recent House special elections, specifically last week in upstate New York, give some credence to the reality of that polling. Gas prices, perhaps the easiest-to-notice indicator of the broader inflation problem, have fallen sharply from their spike earlier this summer, though one cannot predict with any level of certainty where gas prices will be on Election Day.

Democrats, hoping to make this election more of a choice than a referendum, are benefiting from some damaged Republican candidates in several key races as well as the emergence of abortion as a key issue in the aftermath of the Supreme Court’s Dobbs decision — and perhaps also from a continued focus on a particularly visible former president, Donald Trump. We have detailed many of these factors in our recent updates on the overall House, Senate, and gubernatorial picture.

Monday is Labor Day, a traditional campaign kickoff date that now is more of a signal that the never-ending campaign season is nearing conclusion. So we think it’s time to make a couple of key rating changes in the Senate. These changes reflect improving odds of Democrats holding their tiny majority, but still suggest an overall battle for the majority that is effectively a Toss-up.

We are moving 2 of our 4 Toss-ups, Arizona and Pennsylvania, from Toss-up to Leans Democratic, signifying a small Democratic edge in these 2 closely-watched contests. Our new Senate ratings are shown in Map 1. They reflect 49 seats at least leaning Democratic (including those not on the ballot this year), and 49 seats at least leaning Republican, with just 2 Toss-ups: Georgia and Nevada. 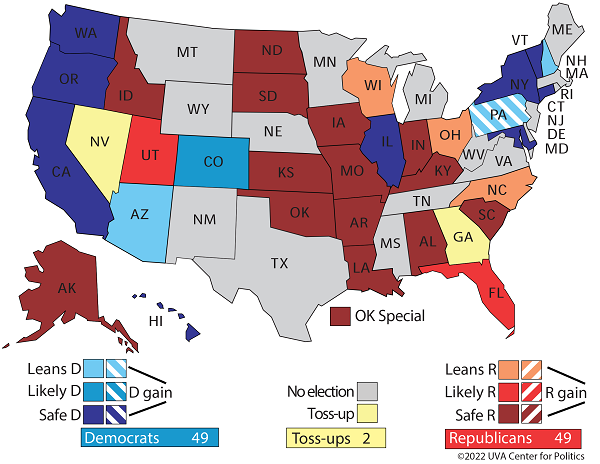 Let’s get into the rationale for these changes.

We have noted in the past our skepticism about Kelly’s opponent, first-time candidate and former venture capital fund executive Blake Masters (R). With support from Trump Republicans, Masters staked out hard-right positions during a long, contentious primary — most notably on abortion — but is now trying to move a bit back toward the center. Kelly is significantly better funded than Masters, which may impede the latter’s ability to pivot. That monetary gap has now been exacerbated by the Senate Leadership Fund — the outside Republican group connected to Senate Minority Leader Mitch McConnell (R-KY) — canceling $8 million in ad support for Masters. SLF is likely trying to get Peter Thiel, the billionaire venture capitalist, to intervene on Masters’s behalf, as he did for Masters during the primary. But so far, Thiel has shown no interest in spending in the general election for Masters (or for his other favorite candidate, Ohio Republican J.D. Vance).

The Arizona situation reflects a broader money crunch for Republicans, as their candidates are generally getting outraised by Democrats and Republican outside groups like SLF feel obligated to spend in places they hoped they wouldn’t have to (like in Ohio). At this point, Kelly and his Democratic allies appear to have considerably more money reserved in Arizona for the fall than Masters and his Republican allies. Money is not everything, but Masters is already behind and needs all the help he can get to catch up.

Polling in Arizona almost certainly inflates whatever eventual advantage Kelly might have: He’s up somewhere in the mid-to-high single digits, although he has been routinely hitting or coming close to hitting the crucial 50% mark.

Do we think Kelly would win by high single digits, as some polls suggest? No way. But taking into account the Democratic spending disparity, Kelly’s candidate-quality advantages over Masters, and the environment looking not as bad for Democrats, we don’t really think this is a true Toss-up anymore. So Leans Democratic it is.

Last week, we looked at states that may potentially produce a split-ticket outcome in their Senate and gubernatorial races. In the case of Pennsylvania, we noted that if the election were today, we would not expect its voters to render a split verdict — Democrats would probably win both of the state’s biggest contests. We are adjusting our rating in the Senate race to reflect our thinking there.

In May, television doctor Mehmet Oz edged out businessman David McCormick by less than 1,000 votes to win a 7-way GOP primary with just over 31% of the vote. Despite his win, there were signs Oz would have trouble consolidating voters within his own party. A pre-primary poll from Fox News put his favorability spread at about an even 45%/46% among Republican primary voters — none of his opponents had a negative number that high. Lt. Gov. John Fetterman, the Democratic nominee, easily took his party’s nomination.

Oz does seem to be putting in the legwork by keeping an active schedule, but some of his self-inflicted wounds have often enabled the Fetterman campaign to control the narrative. In one such instance, Oz — in a (perhaps unintentionally) viral video — tried to highlight inflation at a grocery store, but was widely mocked. Democrats are also banking on another, more parochial dynamic: Oz lived in New Jersey until launching his campaign and even now has very tenuous connections to Pennsylvania. Part of Fetterman’s persona, by contrast, is his affinity for Sheetz convenience stores (the chain is based in western Pennsylvania). In a late July  Fox News poll, a majority of respondents (52%) were extremely or very concerned that Oz was not familiar enough with the state to represent it effectively in the Senate.

Perhaps because of all this, Oz’s high unfavorable rating appears to have carried over to the general electorate: in an Emerson College poll released last week, Oz trailed Fetterman by 4 points. While this has been one of the closer polls out in recent weeks and Fetterman sported only a so-so 48%/46% favorable spread in it, Oz was firmly on negative ground, sitting at 41%/56%.

One important factor here may be Fetterman’s health. Shortly before the May 17 Democratic primary, Fetterman was hospitalized for a stroke. Though he won his primary overwhelmingly, and has been hitting the campaign trail, Republicans are hoping to capitalize on some lingering doubts that voters may — or may not — have about the pace of Fetterman’s recovery. In a July campaign ad, Oz, while jogging, maintained that voters should be most concerned about what he described as Fetterman’s far-left ideas — but the visual implication of the spot seemed clear. Some of Oz’s messaging reminds us of then-Senate candidate Slade Gorton’s (R) 1980 (successful) campaign against veteran Sen. Warren Magnuson (D-WA) — Gorton, who was an avid runner, sought to draw similarly subtle contrasts with Magnuson, who was in his 70s and walked with a limp. Looking forward, the Oz campaign is complaining about Fetterman’s reluctance to debate, something that may stem from — and reinforce — concerns about the latter’s health.

It is not as though Republicans have nothing to use against Fetterman — despite his well-crafted, burly image, he is not particularly moderate. But image does matter in politics, and Fetterman’s is just stronger than Oz’s, at least for now.

At Labor Day, we think it is fair to make Fetterman a slight favorite. One thing that may help Republicans in Pennsylvania is that the ad spending wars appear much closer to parity there than in Arizona, at least at the moment, although Fetterman’s campaign has shown more fundraising juice than Oz’s, and candidates get better ad rates than outside groups like SLF.

Just like Arizona, Pennsylvania is one of the most marginal Biden-won states, so we find it difficult to believe polls that show Fetterman up by more than 10 points. That said, Oz has not led in a single public poll since the general election started, and it seems likely that Fetterman is up by single-digits at this point. We are moving the race to Leans Democratic.

Are we being too friendly to Democrats by moving Arizona and Pennsylvania off Toss-up? Quite possibly. On the other hand, you could argue we’re being too friendly to Republicans in at least one state: Wisconsin, where Lt. Gov. Mandela Barnes (D) has posted surprising leads in several independent polls — even in the typically GOP-friendly Trafalgar, which found Barnes up 2 points a couple of days ago (although such a small lead might as well be a tie). Sen. Ron Johnson (R-WI) continues to struggle with favorability. As Marquette University Law School pollster Charles Franklin points out, Johnson entered the 2016 cycle more anonymous than he is now — he scored an upset victory that year by winning over ambivalent voters. Now, as more voters have firm opinions of him, Johnson’s favorables are not impressive. But we still ultimately favor Johnson in a state where Republicans do not appear likely to be at a spending disadvantage and where they appear to have ample opportunity to paint Barnes as left-wing. Wisconsin’s Senate race remains Leans Republican, to us.

So we only have 2 Toss-ups right now, the seats that Sens. Raphael Warnock (D-GA) and Catherine Cortez Masto (D-NV) are defending. We don’t have much of a handicap in either at the moment. But we think both are legitimately close enough that we wouldn’t be surprised if the GOP sweeps both. This is why we still see the Senate as an overall Toss-up even though, based on our current ratings, Democrats only need to win one of these Toss-ups for a majority and Republicans need to win both (because Democrats only need 50 seats for a majority thanks to Vice President Kamala Harris’s tiebreaking vote, whereas Republicans need an outright majority of 51).

We noted above that Biden’s improved approval rating factored into our changes today. On July 21 (a little more than a month ago), Biden hit a low mark in both the RealClearPolitics and FiveThirtyEight averages of national surveys: He was at 36.8% approve/57.5% disapprove in the former and 37.5%/57.2% in the latter. As of Tuesday afternoon, he was at 41.9%/54.7% in RCP and 42.4%/53.4% in 538. That’s a net improvement of nearly 10 points in both aggregators, even though no one should describe Biden’s overall numbers as strong. In fact, his numbers right now are comparable to where Donald Trump’s were 4 years ago.

Some of that pro-Biden movement is likely from Democrats coming home, although there has been some indication of improvement with independents, too: Gallup, for instance, had Biden’s approval moving from 31% with this group to 40%. Again, we definitely are not arguing that 40% approval overall or with independents is good; the only point is to note the improved trajectory for Biden, which may or may not last. Independents are important to monitor, as they generally pay less attention to politics than strong partisans and are likely going to be cross-pressured in this election. Put differently, many of them don’t approve of Biden but also may be receptive to Democratic arguments about Republican extremism, particularly on abortion following the fall of Roe vs. Wade.

It may be, as we get into the fall, that the numbers improve for Republicans as they benefit from running against a still-weak Biden and as the opposition party in a midterm. If that’s true, these rating improvements for Democrats may have proven to be too optimistic for them — and we will adjust accordingly.

But we do like the position of Kelly and Fetterman compared to Masters and Oz, respectively, as the sprint to Election Day begins.